Background: Methicillin-resistant Staphylococcus aureus (MRSA) is a major causative agent of healthcare-associated infections (HAIs). MRSA surveillance programs identify asymptomatic patients colonized with MRSA and may limit transmission of the organism to other patients. These programs have been advocated as an approach to combat these infections, but their effectiveness remains controversial.

Objective: To compare the rates of MRSA-related HAIs before and after the introduction of an active hospital wide universal PCR-based surveillance program, and to estimate the incremental cost effectiveness ratio with regard to cost per infection prevented and cost savings per dollar spent on the program.

Methods: We reviewed the electronic medical records (EMR) of patients with MRSA-related HAIs admitted to our hospital one year before and one year after the introduction of an active PCR-based MRSA surveillance program (2007 and 2008, respectively). We included respiratory, blood stream, urinary tract, and wound infections. A modified Appropriateness of Admission Evaluation protocol was used to classify hospital days as either MRSA-attributable, non-MRSA-related, or combined MRSA/non-MRSA days. We obtained patient-level activity-based costing data from the patients' EMRs and separated all admission costs into MRSA-attributable costs (all costs incurred during the MRSA-attributable days and selected costs incurred during the combined days) and non-MRSA-related costs. A cost effectiveness analysis from a hospital perspective was conducted by comparing the costs incurred in running the program against the costs saved by preventing specific infections at 1 year. The willingness to pay threshold was set at USD 100,000/QALY gained.

Conclusions: A universal hospital-wide active PCR-based MRSA surveillance program is clinically effective and may be associated with cost savings from the hospital perspective. The intervention was well below the $100,000/QALY cost effectiveness threshold. Further research, including longer follow up studies, and a stated preference approach based cost benefit analysis, is needed to confirm these findings and to fully assess the cost-effectiveness from a societal perspective. 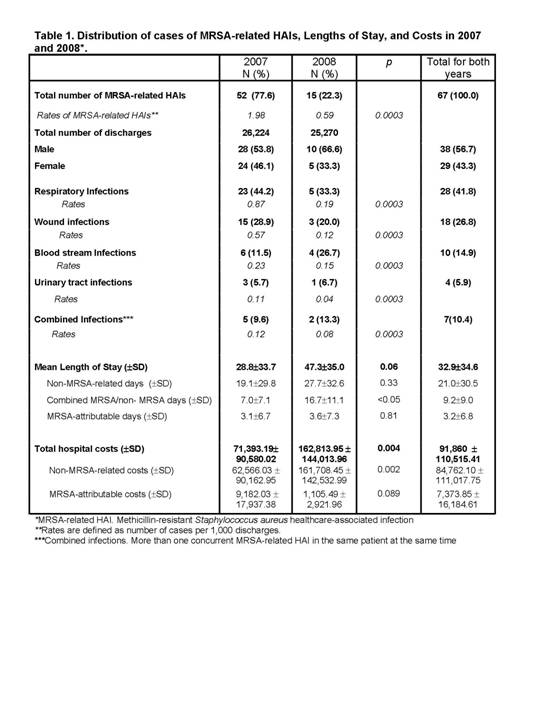