Background: Nosocomial infection (NI) surveillance in intensive care units (ICU) is a priority as patients are at higher risk of infection due to their critical status and to invasive device exposure.

Objective: Surveillance in ICU within a network is performed to assess and compare NI rates over time and amongst ICU, providing an evidence-based approach for improving infection control practices. Standardized infection ratios (SIR) have been used to optimize benchmarking.

Methods: Since 2004, the national REA-RAISIN network conducts 6 months a year a patient-based NI surveillance in ICU for each patient staying more than 2 days in the unit and focusing on device-related infections. Data from 212 units corresponding to 415 surveillance periods (2004-2006) and 34,139 intubated patients were available. To monitor a risk-adjusted approach for ventilator-associated pneumonia rates (VAP), we used a time dependant Cox model that directly integrates duration of intubation. We built the statistical model following different steps: 1) identification of risk factors significantly associated with VAP using uni- and multivariate analysis. 2) construction of the final model to calculate the individual probability of infection and estimate the number of expected VAP per unit and period of surveillance 3) calculate the SIR (observed/expected VAP) and use a Poisson distribution to test if it significantly differs from 1. To avoid bias, SIR were calculated only for units having at least 90% of their patients without missing data. Secondarily, for units' feedback, SIR were also calculated for 2007 data.

Considering the 521 periods from 2004 to 2007, 36 units (3.5%) had significantly low VAP rates (RSI<1) meaning that they "observed less VAP than expected if they had behaved as the globality of the network participants"; 101 (9.7%) had significantly high rates (RSI>1), observing more VAP than expected. Useful for inter-unit comparisons, SIR ranged from 0.00 to 3.66 and the distribution of units is illustrated in the figure. All units were given their own RSI for each of the 4 consecutive years and could also make intra-unit comparison over time.

Conclusions: Standardized infection ratio is a practical risk adjustment statistic available for comparisons of VAP incidence. It also has the great advantage to be very well understood and accepted by intensivists and infection control teams. 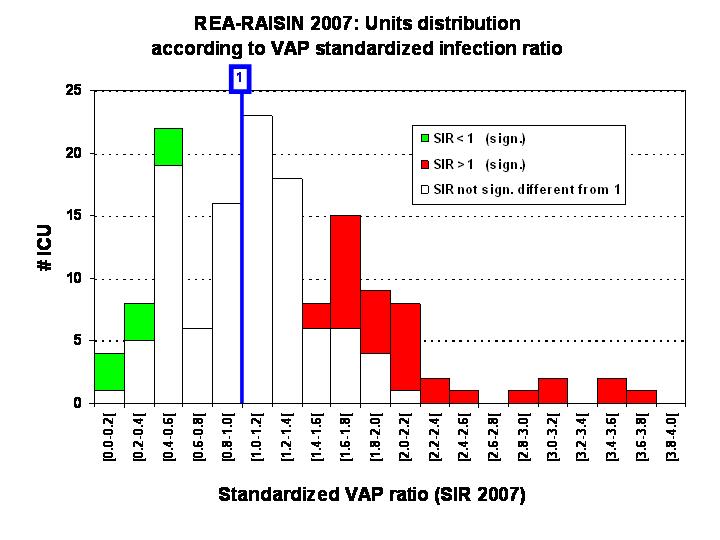