730 A Multicenter Study of Colectomy Incidence for Clostridium difficile Infection

Objective: To determine the rate of colectomy for CDI over time and by CDI onset at 5 hospitals.

Methods: Data on adult patients with toxin-positive CDI admitted from 7/2000-6/2006 were collected from electronic hospital records from 5 tertiary-care centers in the United States. Patients who underwent colectomy and had CDI were identified and chart review was conducted to assess if the colectomy was for CDI. Colectomy rates per 1,000 CDI cases were calculated. Differences in colectomy rate across facilities and by CDI onset were compared by chi-square. Differences between patients who underwent colectomy and patients who did not have a colectomy were compared by chi-square or Mann-Whitney U. Trends over time were assessed by chi-square test for trend. CDI cases were categorized according to published recommendations (McDonald, et al. ICHE. 2007. 28:140-5).

Conclusions: The overall colectomy rate is low. Compared to the other CDI surveillance definitions, community onset cases with recent healthcare facility exposure had the highest rate of CDI-related colectomies. High colectomy rates among cases with unknown CDI-onset are perhaps due to self-selection of particularly severe cases presenting to referral study centers from other hospitals, and therefore no toxin results at the study hospital. Though no significant increase in colectomy rates was seen over time, there are disparities in the rates between centers, possibly reflecting true differences in the severity of the disease or thresholds for performing surgery for CDI-associated colitis. 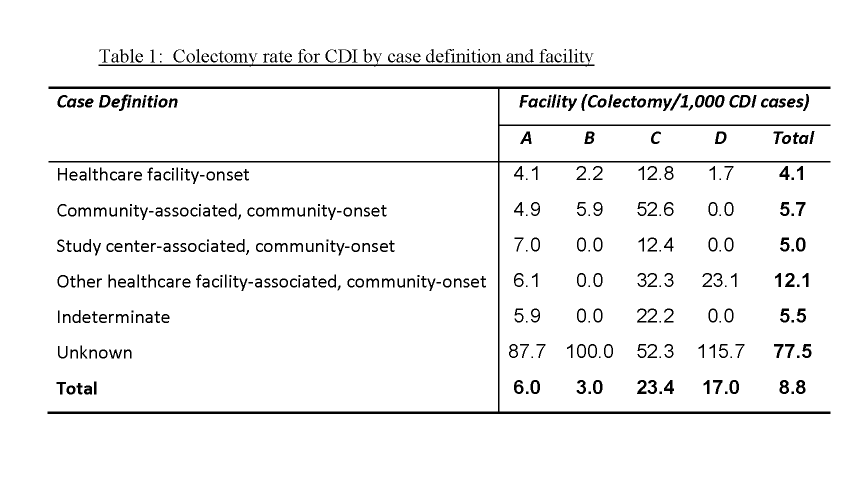