Healthcare-associated infections (HAIs) are important causes of morbidity among hospitalized pediatric patients. Surveillance through the National Healthcare Safety Network (NHSN) includes reports of device-associated (DA) HAIs in children, which are not well-described in the literature.

To describe the epidemiology and pathogen distribution of DA HAIs among hospitalized non-NICU pediatric patients in a large national sample of hospitals.Ā To examine differences in pathogen profiles by age group and patient care location.

We analyzed data from hospitals reporting to NHSN during 2006¢2008. We evaluated central line-associated bloodstream infection (CLABSI), ventilator-associated pneumonia (VAP), and catheter-associated urinary tract infection (CAUTI) among hospitalized non-NICU patients aged < 18 years. We compared differences in the distribution of the five most commonly reported pathogens and resistant organisms by patient care location (intensive care unit [ICU] vs. other hospital locations) and by age group (aged ≤ 1 year and > 1 year) for each infection type using a Mantel-Haenszel chi-square test.Ā

During 2006¢2008, 292 facilities reported 3,364 DA HAIs among 2,756 pediatric patients: 2,127 (63.2%) CLABSI, 520 (15.5%) VAP, and 717 (21.3%) CAUTI. Most (2,758, 82%) were reported from ICUs, but distributed between adult ICU (18.1%) and ward (5.3%), and pediatric ICU (63.9%) and ward (12.7%). Almost half (46.7%) of infections occurred among patients aged ≤ 1 year. The distribution of reported pathogens causing CLABSI did not differ significantly between ICU and other locations; data for VAP and CAUTI were insufficient to for this comparison. The distribution of pathogens causing CLABSI and VAP was significantly different between age groups, while the distribution of pathogens causing CAUTI was not (Table). Pooling all HAI types, the proportion of Enterococcus faecium isolates resistant to vancomycin (VREF) was lower among patients aged ≤ 1 year than patients aged >1 year (51.2% vs. 73.6%, p=.02), while the proportion of Staphylococcus aureus isolates resistant to methicillin (MRSA) did not differ by age group (37.3% vs. 36.0%, p=.80).Ā Percent VREF or MRSA did not differ significantly between ICU and other locations.

Differences in pathogens associated with DA HAIs were observed between ≤ 1 year-olds compared to older non-NICU pediatric patients, most notably for CLABSI and VAP.Ā These may be related to age and other factors including underlying medical condition, antibiotic exposure, and device utilization. Non-NICU pediatric DA HAIS are not limited to a specific hospital location and may need detailed evaluation to direct pediatric-specific HAI prevention interventions. 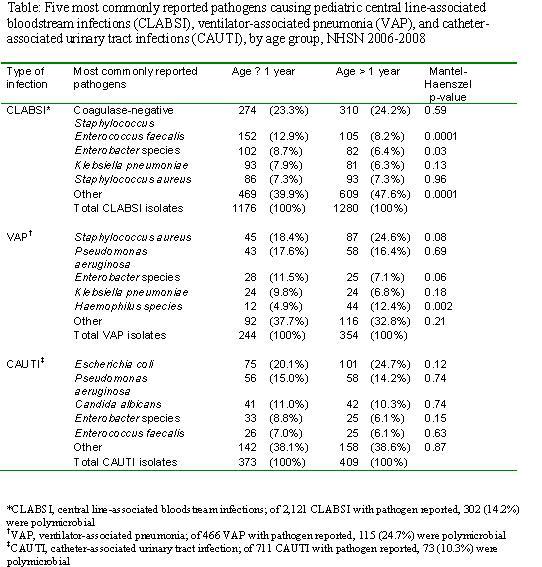