Background: MRSA continues to increase in most areas of the world. The impact of a multi-year universal surveillance and decolonization program for reducing spread of MRSA on health care–associated disease in the US is not known.

Objective: To expand the data available on the effect of universal surveillance, with contact isolation and decolonization of positive patients, from our published 21 month (Ann Int Med 148: 409, 2008) report to the impact of this program on MRSA disease over 4 years.

Methods: Observational study in a 3-hospital, 850-bed organization with 40 000 annual admissions comparing rates of MRSA clinical disease during and 30 days after hospital admission with an intervention using a real-time PCR-based nasal surveillance for MRSA followed by topical decolonization therapy and contact isolation of patients who tested positive for MRSA. This evaluation involved 3 consecutive periods: baseline (1 year), MRSA surveillance for all admissions to the intensive care unit (ICU; 1 year), and universal MRSA surveillance for all hospital admissions (4 years).  All infections were confirmed by chart review. After showing no autocorrelation, aggregate hospital-associated MRSA rates were compared using a segmented Poisson regression model. Chi square test was used for other statistical comparisons.

Results: The prevalence density of aggregate hospital-associated MRSA disease (all body sites), defined as infections per 10 000 patient-days, at baseline, during ICU surveillance, and during universal surveillance was 8.9, 7.4 (P = 0.15 compared with baseline), and 3.3 (P ≤ 0.001 compared with baseline and ICU surveillance), respectively. The prevalence density of MRSA infection at each body site decreased. The percentage of exogenous MRSA fell over the four years from 48.1% to 33.3%, suggesting less new acquisition of MRSA during hospitalization. Additionally, the rate of total clinical S. aureus and MRSA recovered from hospitalized patients declined from baseline over the 4 years of universal surveillance: from 20.2 and 10.4 cases/1,000 admissions to 13.4 and 4.1 cases/1,000 admissions (P ≤ 0.001), but methicillin susceptible S. aureus did not change. This intervention was estimated to reduce healthcare infection cost by almost $9 million. Additionally, based on published data (JAMA 298:1763, 2007), we prevented 72 deaths. 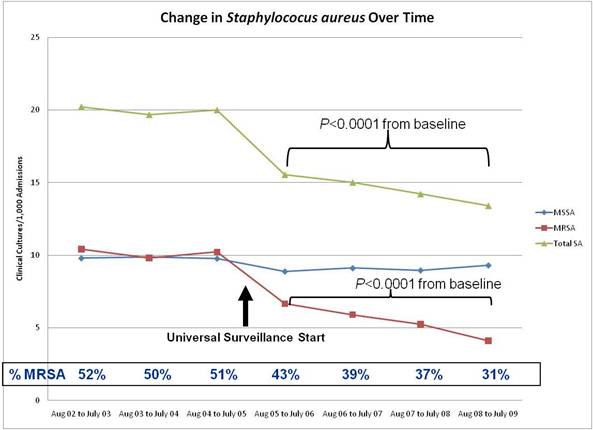