Background:   Traditional methods to track communicable diseases include laboratory diagnostics, provider reporting, and hospitalizations. Syndromic surveillance (SS) systems developed in recent years are used to detect emerging infectious diseases such as pandemic influenza. However, validation of these systems in the context of an emerging pandemic is lacking.

Methods:   BioSense signals were generated from chief complaint (text) and final diagnosis (ICD-9 code) data fed to the CDC from JHH in near real time.  Information was ‘binned' according to an algorithm designed to detect influenza-like illness (ILI).  Patients positive for influenza at JHH were identified using electronic surveillance and laboratory and provider reporting.  BioSense ILI was compared to cases of laboratory-confirmed (LC) influenza for 2009, encompassing the peak of the 2008-2009 influenza season and the 1st and 2nd waves of pandemic H1N1.  ILI and LC influenza cases were plotted over time, and linear correlations were performed between BioSense and laboratory surveillance to generate quantitative measures of similarity.

Results:   SS through BioSense accurately detected both the first and second waves of pandemic H1N1 influenza when compared to traditional laboratory surveillance (Figure 1).  There was significant correlation in the trends BioSense and laboratory surveillance for the 1st wave of pandemic H1N1 (onset: rho = 0.75, p = <0.0001; decline: rho = 0.9, p = <0.0001), and the onset of the 2nd wave (rho = 0.99, p = <0.0001).  The trends for the 2008-2009 influenza season also showed significant correlation.  One peak in BioSense ILI cases did not have a corresponding increase in LC influenza cases.  This peak's onset occurred 7 days after the first report of novel H1N1 influenza was published.

Conclusions:   Trends in ILI generated by BioSense correlate significantly with traditional laboratory surveillance for both seasonal and pandemic H1N1 influenza at JHH.  SS was a useful supplement to traditional surveillance methods to monitor the course of this emerging pandemic at JHH.  SS is less time consuming and uses automated systems to provide such data.  SS during a pandemic can be confounded, however, by other variables.  Increased public awareness and concern regarding ILI during the pandemic may have increased the numbers of patients seeking medical attention for ILI, producing syndromic surveillance signals unrelated to true influenza.  These caveats must be recognized when interpreting SS in the context of an emerging pandemic. 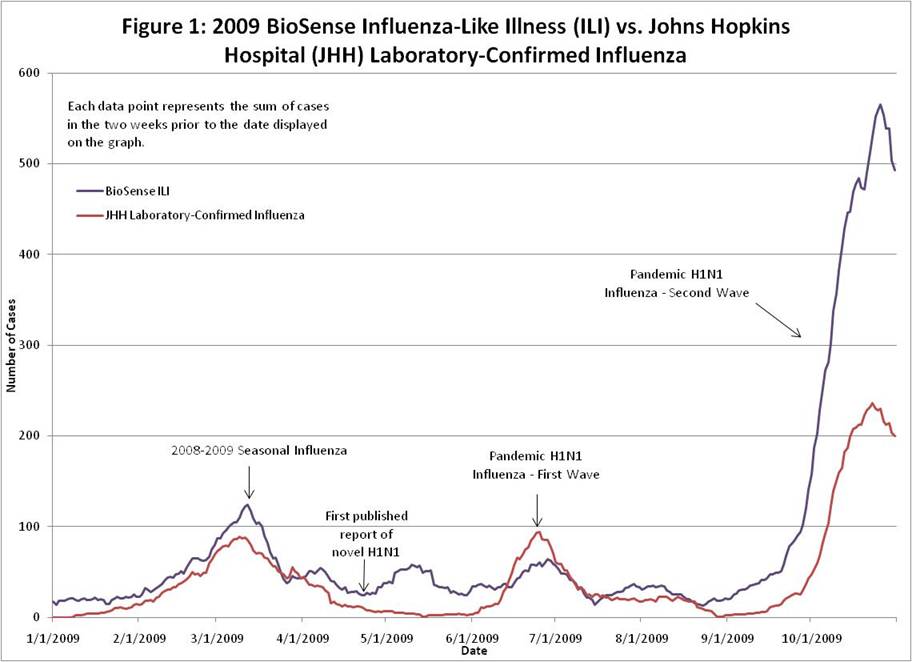