Objective: To evaluate the nature and rate of occupational exposures at an academic medical center

Methods: The Nebraska Medical Center maintains a database of all occupational bloodborne pathogen (BBP) exposures reported.  Occupational BBP exposures are reported through a pager system staffed 24-hours per day by personnel in Employee Health.  Exposure incidents were reviewed from January 1, 2000 through September 30, 2009.  Descriptive information regarding each incident was obtained and rates of injury were characterized.

Results: 2337 exposures were documented with nursing staff (737), housestaff (529), and students (212) being the groups most frequently reporting exposures.  The majority of exposures were percutaneous (81.5%) but eye/mucus membrane (15.1%) and non-intact skin exposures (3.3%) also occurred.  Blood was the most common (89.9%) bodily fluid to which HCWs were exposed.  Needles (1393 injuries) and scalpels (167 injuries) were the most common cause of percutaneous injury.  Needles used for suturing and injecting agents through the skin, and butterfly needles were most commonly involved in injuries (524, 325, and 108 injuries respectively).  Safer devices were available in only 25.8% (391/1513) of percutaneous injuries.  Injuries using safer devices occurred most frequently (75.4%) before or during activation of the device.  The 4 most common activities being performed when injury occurred were surgery, suturing, drawing blood, and injecting through the skin.  2198 (94.1%) sources were identified with 17 (0.77%) positive for hepatitis B, 193 (8.8%) positive for hepatitis C, and 68 (3.1%) positive for HIV.  6 workers were treated with hepatitis B immunoglobulin and post-exposure prophylaxis (PEP) for HIV was indicated in 53 HCWs.  50 initiated PEP, 3 refused, and 27 completed the PEP course.  13 workers stopped PEP due to negative test results in the source patient, 6 stopped due to medication side effects, and 4 had no further data recorded.  Rates of percutaneous injuries and overall exposures remained relatively stable from 2001-2009 (Fig 1) with a decrease noted in 2001 and 2005. These decreases coincided with the introduction of safety needles for venipunctures and intravenous catheters in 2001 and the replacement of one of these devices with a safety device of a different mechanism in 2005. 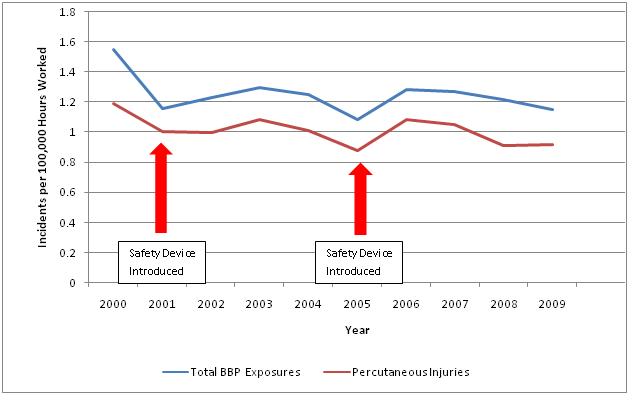