Methicillin-resistant Staphylococcus aureus (MRSA) is challenging to treat in neonates and is associated with significant morbidity and mortality. Although decreases in MRSA central line-associated bloodstream infections (CLABSIs) in adult and pediatric ICUs in the United States have been recently documented, it is unclear if this same trend has occurred in NICUs.

We analyzed CLABSI surveillance data reported to NNIS from 1998-2004 and to NHSN 2006-2008. Surveillance data were not available for 2005. MRSA CLABSI pooled mean annual incidence rates (CLABSI/10,000 central-line days) were calculated by pooling data across all NICUs by each birthweight category and calendar year. Percent of MRSA was defined as the proportion of S. aureus CLABSIs tested for methicillin or oxacillin that were reported resistant.   We used Poisson regression to estimate changes in incidence over the analysis period. We performed a sensitivity analysis to confirm findings by limiting Poisson regression to NICUs reporting at least 1 month of data and 50 central-line days in each year of the analysis period.

We observed a significant increase in incidence of MRSA CLABSI among NICU patients during a period where MSSA CLABSI did not change significantly. Understanding the reasons of this increase (e.g. differences in adherence to central line insertion practices, barriers for best practices, or need for NICU-specific interventions) may help develop effective targeted prevention strategies. 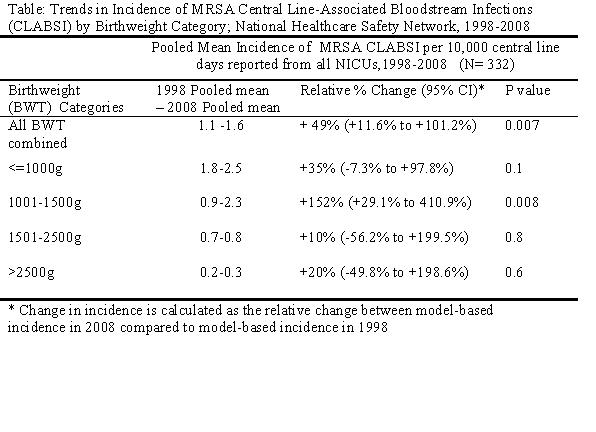