Background: It is important for HAI surveillance systems to reliably detect real changes in HAI rates.  Manual surveillance (MAN) is routinely performed by Infection Preventionists and incorporates objective and subjectivefindings with individual interpretation.  Automated algorithms (AA) using only objective, electronic data have been developed to measure HAI more objectively and reliably, but both MAN and AA may be influenced by screening practices such as active MRSA surveillance.

Objective: Compare three AA for HAI surveillance with each other and with MAN, and analyze the rates generated by each approach using a time-series analysis. 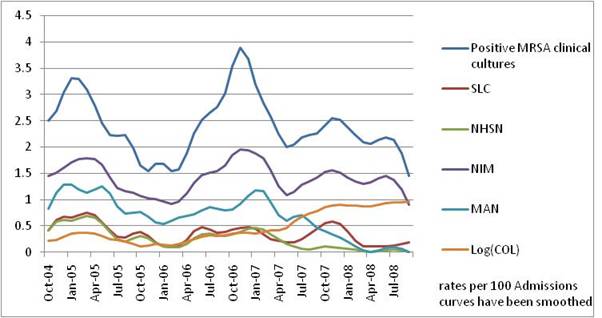 Conclusions: HAI metrics should not be influenced by changes in screening practice.  AA are reliable, but because NHSN subtracts out COL, NHSN rate changes are biased by increases in screening.  It is still unclear if MAN's correlation with COL reflects influence from a VA MRSA initiative incorporating active surveillance which started around 10/07.  Although decreases in HAI rates were observed around the institution of this VA initiative, we found variable results.  The interpretation of HAI rate measurements should be approached with care.  Further study is underway to compare AA and MAN to a reference standard.