Objective: To measure AG use in a consortium of academic medical centers and associated changes in G-R for selected organisms.

Methods: We measured individual and total AG use by Days of Therapy (DOT) per 1000 patient days (PD) for 2002-2008 in 26 US academic medical centers that participate in the University HealthSystem Consortium (UHC) Clinical Resource Manager (CRM). We obtained annual hospital-wide antibiograms and examined G-R by proportions (% G-R) and incidence rates (number G-R /1000 PD) for P. aeruginosa, A. baumannii, K. pneumoniae and E.coli. Mixed model repeated measures ANOVA assessed changes in use and resistance over time.

Conclusions: AG use continues to decline in this sample of academic medical centers, and is paralleled by a decline in G-R P. aeruginosa.  However, G-R among E. coli is increasing and has not changed for K. pneumoniae and A. baumannii. 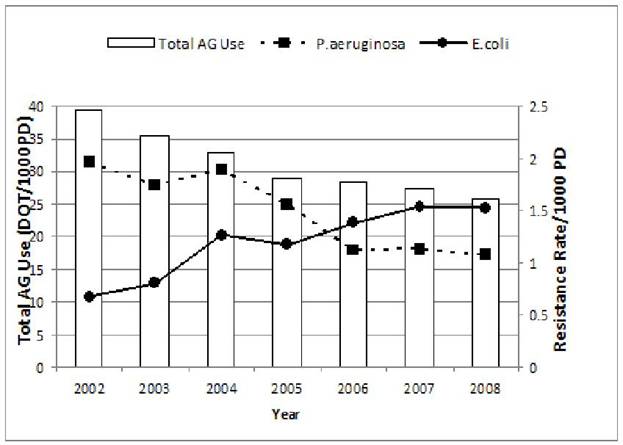