Background: Methicillin Resistant Staphylococcus aureus (MRSA) is a major cause of hospital-acquired infections (HAI). Whether or not early identification and isolation of MRSA reservoirs reduces MRSA transmission has been a subject of debate in the literature. In 01/04, Park Nicollet-Methodist Hospital initiated an Active Surveillance Culture (ASC) program for all patients admitted to the ICU. In 2007 the ASC program was expanded to include admissions to inpatient care units.

Objective: To identify and isolate patients colonized with MRSA as part of our strategy for eliminating MRSA HAI.

Methods: In 2007, we implemented a hospital-wide ASC for MRSA detection. The anterior nares of patients admitted to the hospital were tested for MRSA using standard CHROMager® culture methods. Results were available at 18-48 hours. Patients testing positive were placed in contact isolation. MRSA HAI's were defined using CDC criteria and identified by review of microbiological and clinical data. MRSA HAI rates were calculated as the number of cases per 1,000 patient-days.

Results: ASC were collected on 86% of eligible patients. ASC identified an average of 48 new MRSA colonizations per month, a 2.6% increase over patients with previously known to be colonized. In 2005 and 2006 we experienced 31 and 25 MRSA HAI respectively. Our ASC program was phased in during 2007. Since implementation our number and rates of MRSA HAI have steadily dropped. Pre-intervention, our whole hospital MRSA HAI rate was 2.56 per 1,000 patient-days. Post- intervention, in 2007 whole hospital MRSA HAI rates dropped to 0.094 per 1000 patient-days. This reduction continued in 2008 (0.091) and 2009 (0.062).  In previous years, MRSA HAIs occurred in multiple sites. However, in 2009 our five MRSA HAIs have all been surgical site infections. 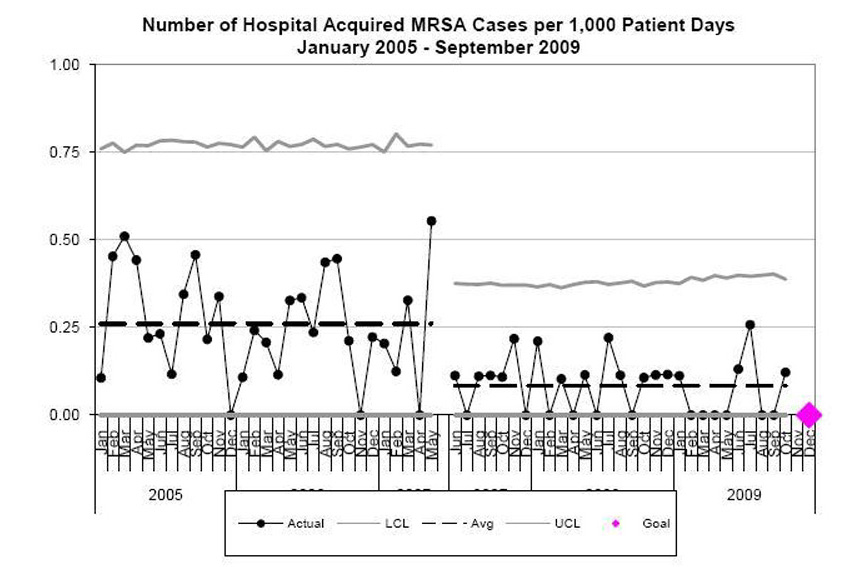