Background: The Department of Health and Human Services (HHS) Action Plan to Prevent Healthcare-Associated Infections has a 5-year goal to reduce symptomatic catheter-associated urinary tract infections (CAUTI) by 25%, mainly by reducing device utilization, using 2009 as a baseline year.  There are concerns that reducing catheter use may result in a paradoxical rise in CAUTI rates by limiting the pool of catheterized patients to a higher-risk group.

Objective: To use national surveillance data to characterize the frequency of this paradoxical occurrence.

Methods: Data from medical, medical-surgical and surgical wards and ICUs reported to the National Healthcare Safety Network (NHSN) continuously (at least one month in each quarter) from January 2009 – June 2010 were analyzed.  Rates of CAUTI and device utilization ratios (DURs) were calculated using standard NHSN definitions.  First, Poisson regression models were developed for each location type using unit-specific quarterly DUR to predict quarterly CAUTI rate.  Second, similar modeling was developed for each specific unit.  Third, using Poisson regression, specific units with significant reduction (p<0.05) in DUR over the study period were evaluated for corresponding changes in CAUTI rate (p<0.05) over time.  A similar analysis was done for the subset of units with the greatest reduction in DUR over the 6 quarters (> 0.2 absolute decrease).

Results: Overall 1,193 units contributed data from eligible locations.  On aggregate, DUR was not a significant predictor of CAUTI rate for any ICU types but was a negative predictor for medical wards (parameter estimate -1.74, p<0.001), medical-surgical wards (parameter estimate -2.00, p<0.001), and surgical wards (parameter estimate -4.26, p<0.001).  At the individual unit level, a negative relationship between DUR and CAUTI rate was only seen in 6 of the 1,193 units, and a positive relationship was seen in 5 units.  Overall, 467 units demonstrated significant reductions in DUR over the 6 quarters (median absolute change -0.065, median proportional change -19%); of these, 14 units had increases in CAUTI rate and 9 had decreases; the rest had no change.  Among the 5 wards and 22 ICUs with the greatest reductions in DUR, none had a significant change in CAUTI rate (figure 1).

Conclusions: Despite an association between low DUR and high CAUTI rate among non-ICU locations, individual unit-level evaluation did not find consistent evidence of increased CAUTI rate with decreasing DUR over time.  While individual centers have reported rises in CAUTI rates with dramatic decreases in DUR, this was not observed systematically using NHSN data. Although further studies are needed, our data support the use of CAUTI per 1000 catheter days as an appropriate metric to monitor reductions in CAUTI. 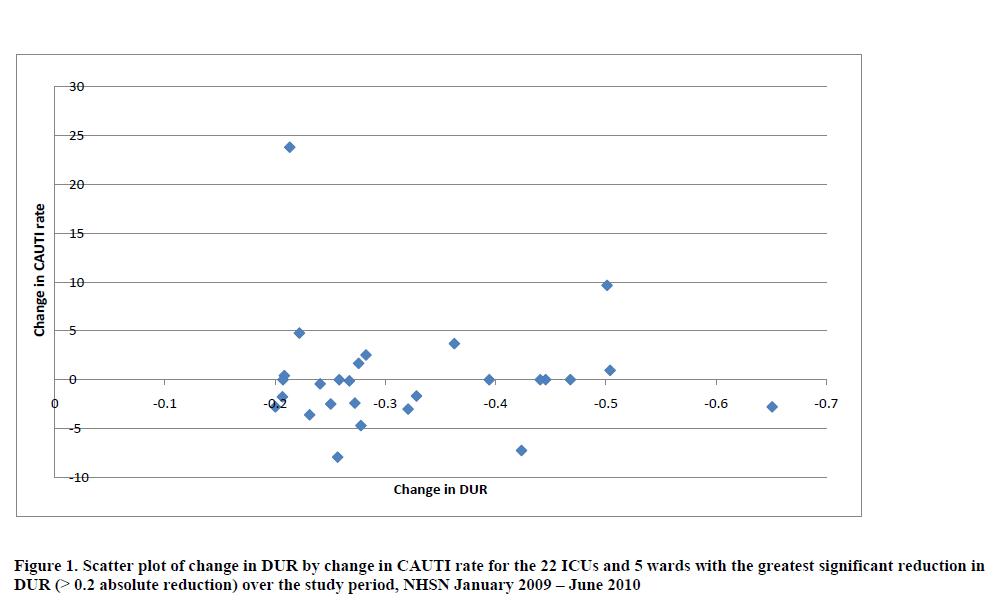