276 What Effect Did Novel A H1N1 Have on HH events at the Bedside in US Hospitals? A Multicenter Analysis of Compliance in ERs, ICUs, and Non-ICUs

Background:   In the first week of April 2009, the first human cases of Novel A H1N1 Influenza (H1N1) were documented in Mexico. Before the end of April, WHO declared it a level 5 pandemic. Healthcare workers (HCWs) were faced with a new virus with unconfirmed methods of transmission, uncertain severity, and unseen impact on human populations.  Hand hygiene (HH) was identified as one of the major control measures for H1N1 and therefore one would expect to see a significant increase in HH activity at the patient bedside.  We compared a time-trend analysis of HH events to (1) the CDC's data on hospitalization of patients with Influenza-Like Illness (ILI), (2) the CDC's H1N1 response phases, and (3) our own HH historical data from previous years (2004-7).

Objective:   To track monthly hand hygiene time/trend data from ERs, Non-ICUs, and ICUs during the 2008-9 flu season, compare results to a data related to the H1N1 monitoring by CDC and WHO, and compare results to HH historical data for the prior four years.

Methods:   To measure HH events, this study used the standardized methodology of McGuckin Methods International's HH reporting program using product usage methodology.  The volume of soap and sanitizer used each month, and patient census, was submitted by each healthcare facility to our analysis center.  We used the data to determine the number of HH events per patient per day (HH/bed day) in the in-patient units, and we determined the number of HH events per patient visit for the ERs.  We compared this to CDC data on percentage of hospital visits with ILI and noted the different CDC H1N1 response phases to determine any reaction in the HH rate to these influences.  We also compared the 2008-9 HH data to past HH data.

Results:  For the period Oct. 08 – Sept. 09 there were 192 data points from ERs, 1447 from Non-ICUs and 535 from ICUs submitted to our analysis center. For the period 2004-07 there were 1249 data points for ER, 9509 for Non-ICUs, and 2849 for ICUs.  Figure 1 shows a higher level of HH events for each unit type at the beginning of the study (Oct. 08), decreasing during warm weather months, then increasing at the end of the period (Sept. 09).  However, the HH event rates in Non-ICUs and ICUs showed noticeable increases in May/June which would suggest awareness to the H1N1 discovery response phase from April/May (including WHO pandemic alerts).  ER HH event rates showed an increase in June.  Also shown on Figure 1 are the mean HH events for the years prior to H1N1 (2004-7). 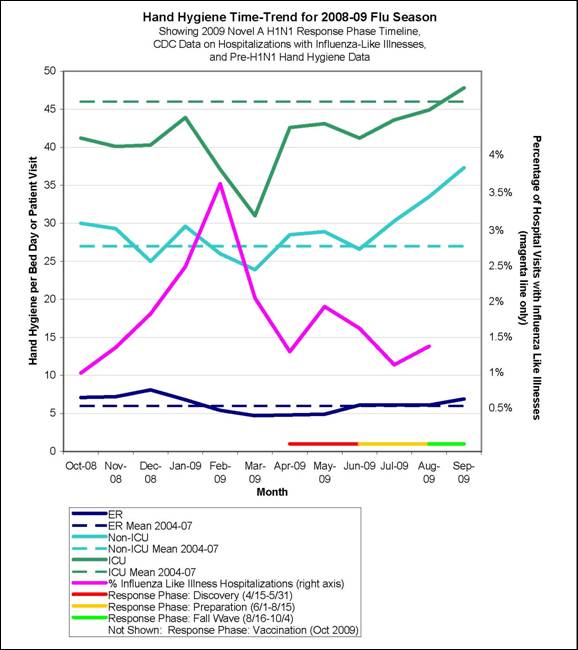 Conclusions:   Results from this study strongly suggest that HH events in ERs, ICUs, and Non-ICUs showed a modest increase that followed the trend of the response and data from authorities. Our data also suggests that HH events at the bedside did not increase significantly when compared to the previous four years. These findings suggest that the HCWs response to H1N1 is more likely to be protection of one's self rather than patient and HCW transmission.