Background: During the 2009 influenza A (H1N1) pandemic, much attention was focused on healthcare preparedness and surge capacity, yet few data exist on how healthcare systems were challenged by the pandemic and whether preparedness efforts were effective. In the Southern Hemisphere, Argentina reported the largest number of confirmed H1N1-related deaths through August 2009. Most cases were reported from the province of Buenos Aires, where the largest national hospital, a 500-bed multispecialty referral hospital, is located.

Objective: To assess hospital capacity and adequacy of preparedness measures at a large hospital in Buenos Aires, Argentina, during the H1N1 pandemic peak.

Methods: We reviewed daily administrative records for measures of hospital capacity, including number of available hospital beds (overall and critical care), and hospital occupancy by ward from three 3-month periods in 2009 and 2008. We compared data from the 3-month peak pandemic period (June 1-August 31, 2009) both with the previous 3-month period (March 1-May 31, 2009), and with the same 3-month period in 2008 (June 1-August 31, 2008), when seasonal influenza transmission normally peaks in the Southern Hemisphere. Overflow was calculated as bed-days when demand exceeded available resource limits.

Conclusions: During the period of peak pandemic H1N1 transmission in Buenos Aires, this large hospital experienced fewer overall hospital admissions, but more critical care admissions, especially of adults. Without advanced assessment of total bed and critical care (e.g. ventilator) needs, combined with methods to either redistribute or acquire new resources in a timely fashion, hospital admissions for severe respiratory disease can exceed capacity for a prolonged period during a pandemic. 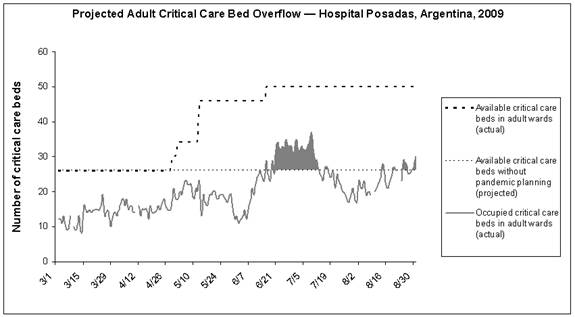