We investigated a cluster of febrile and respiratory illnesses caused by oseltamivir-resistant pH1N1 in a hematology-oncology ward to ascertain patient-to-patient transmission.

We reviewed patient medical records and infection control measures and interviewed healthcare personnel (HCP). We defined a case of oseltamivir-resistant pH1N1 as fever or respiratory illness and laboratory-confirmed oseltamivir-resistant infection by real-time reverse-transcriptase polymerase chain reaction (rRT-PCR) and pyrosequencing in a patient admitted to the ward during September 15–December 4. We confirmed phenotypic oseltamivir resistance by neuraminidase inhibition assay and compared viral isolates from the outbreak with surveillance specimens by using viral genome sequencing.

During September 21–27, 2009, four patients were admitted to the hematology ward for reasons unrelated to influenza infection (Figure). All were ambulatory and had opportunity to interact outside their rooms before onset of influenza-related illness. Three patients were located in adjacent rooms. An index patient experienced fever on October 6, 8 days after completing 5 days of oseltamivir prophylaxis following exposure to an ill family member. Isolation precautions were instituted 9 days after symptom onset. The remaining three patients experienced fever or respiratory symptoms 1, 3, and 5 days after the index patient. All four patients were immunocompromised and had concurrent problems that can mimic infection or respiratory illness. Twelve HCPs reported influenza symptoms during the study period; none were tested for pH1N1. Five reported working while ill; one of these received oseltamivir. Viral isolates from the four patients had complete genomic homology and the H275Y mutation for oseltamivir resistance, which was not identified in other pH1N1 specimens obtained from the hospital or throughout the state. 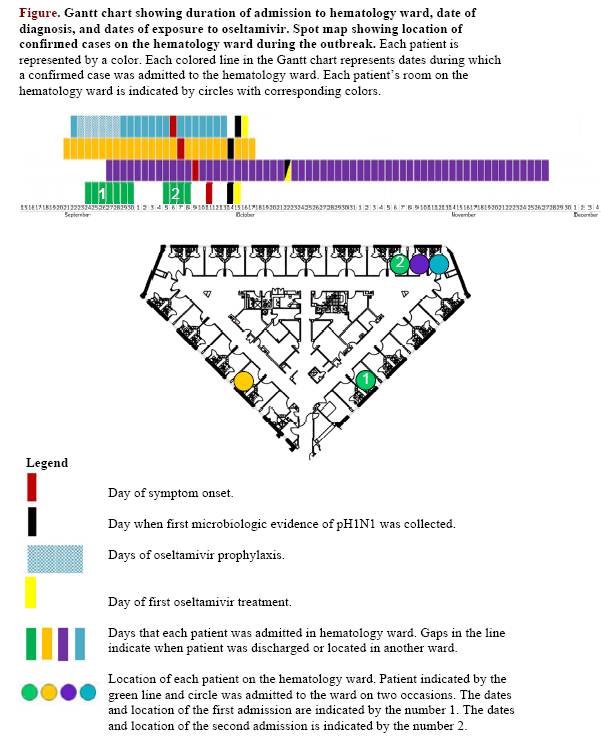